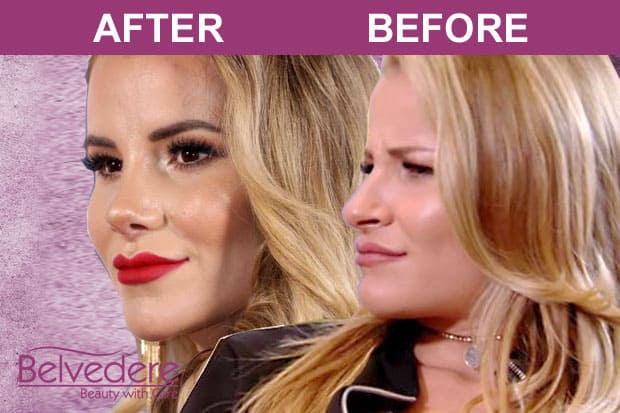 Fans of ‘The Only Way is Essex’ may have spotted that Georgia Kousoulou looks a little different from before – and it’s because she’s the show’s latest star to undergo cosmetic surgery.

TOWIE’s Georgia confirmed that she underwent rhinoplasty surgery to dramatically alter the shape of her nose, which now appears smaller and more rounded than it did before.

The decision to undergo the surgery was, as it is for many non-celebrity and celebrity cosmetic surgery fans alike, to boost her confidence and feel better about her appearance. Sadly, those in the public eye are subjected to intense scrutiny, with many subjected to online abuse and criticism from social media trolls – and Georgia Kousoulou was the victim of such behaviour: hurtful comments about her facial features contributed to her decision to go under the knife.

Now, say friends, her co-stars and her boyfriend, she’s happier than ever with the way she looks. While the social media trolls continue to bully her, with some criticising her decision, Georgia is also receiving plenty of support via Instagram and other social media from fans who think she looks fantastic – and we agree!

Georgia Kousoulou isn’t the sole star of The Only Way Is Essex to undergo cosmetic surgery to boost her confidence levels. Chloe Sims regularly speaks openly about how cosmetic surgery makes her feel more confident, with breast implants, a buttock lift, teeth veneers and regular filler treatments contributing to her look.

Before the filming of The Only Way Is Majorca, a number of TOWIE’s stars treated themselves to procedures to give them a confidence boost for the show’s beachwear shots. Treatments for Sims included a non-surgical facelift, while co-star Megan McKenna focused on lip fillers, and others, opted for teeth whitening before travelling to give confidence in their smile.

Georgia Kousoulou isn’t the only one to focus on her nose, either. Fearne McCann famously underwent rhinoplasty surgery, along with James Argent, while Bobby Norris took to Instagram to talk about the results of his septorhinoplasty process in late 2017: a process that, he says, was undergone to improve his breathing.

One thing’s for sure: there’s certainly no lack of confidence amongst the TOWIE bunch – and it’s clear that, for many, cosmetic surgery is key to helping them to feel their best both on and off screen.

Speak to us now or read more about rhinoplasty at the Belvedere Clinic.  We have locations in London, Kent and Essex.